Woo Hoo! I made it through the 5 day slim down! It was a little rough especially with the cramps and everything, but I actually enjoyed it. I'm proud that I made it through without caving in and giving up and I can honestly say that I don't mind doing this again in the future. Before I was terrified of it and now that it's done, it's not scary anymore. :-) Check out my video and what I had for my last meal on the slim down.

Hey guys! Tone It Up is back with a new and improved slim down just in time for the summer. With this slim down I'll be doing 5 days instead of 7 and I'll be incorporating more fruit, tropical smoothies and drinks. I'm on day three now. I wasn't able to post about this Monday and Tuesday, because I was held hostage at work all day. But, now I have some time to let you know how it's going.

Monday morning started out great. I got my workout in, a protein pancake for my "beach babe breakfast", and a kombucha for my tankini. Then I headed off to work and grabbed some pineapple for my "one piece" of fruit. Unfortunately, my monthly friend decided to come along (I thought I still had a few more days) and so did the cramps. The rest of the night at work was a little rough. I don't have a mini fridge to keep food stuff cool, so luckily they held up in my lunch box with an ice pack. I brought a spicy mustard collard wrap for lunch and did my best to fight off cravings...and it definitely doesn't help when they load a bunch of junk food snacks on set. I had a chickpea patty with veggies and quinoa for dinner and some apple slices for my one piece. Being at work late into the night is the worst because the later you stay up, the more you want to eat but thank God the night was finally over. I didn't get in my second workout because I got home pretty late and needed to hit the sack so I could get up nice and early for work the next day.


No booty call Tuesday morning because of a 6am call time. I had my Tone It Up "bomb shell spell" before leaving. When I got to work I had some sauteed veggies on top of potatoes. Potatoes are not part of the slim down but I only had a little bit.lol The rest of the day I followed the slim down completely and closed my eyes to the temptation around me. It was one of the longest days of work yesterday and I was super proud of myself for making it through the day without giving into my period cravings....and I really wanted some chocolate!!!lol It was late when I got home and I was totally beat from two crazy days of work so I didn't do my 30 minute workout but I did do the Tone It Up "Under the Sea" workout before bed. 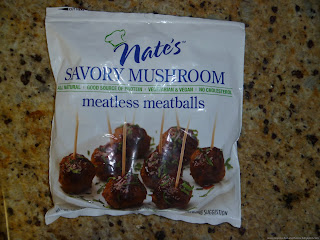 I found these meatless meatballs at whole foods the other day and I decided to give them a try. I usually don't use any "meatballs" when I make pasta but it doesn't hurt to mix things up every now and then. On the Bodyrock.tv website they have an amazing tomato sauce that I've been meaning to try, so it was only natural that the two would go together (especially since they used meatballs in their recipe). I had to veganize it but it was so delicious that I'm sure non-vegans won't be missing any meat or dairy with this dish. 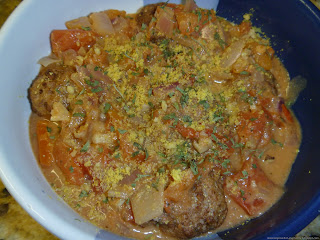 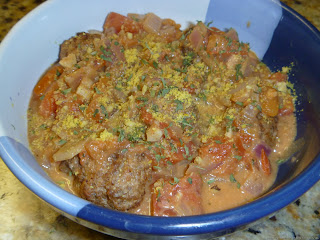 Try and make your own version of this and let me know how it comes out! :-)
Posted by Stephanie at 1:47 PM No comments:

Yummy In My Tummy!

I found a super delicious recipe last week and I just couldn't wait to make it and share with you. The recipe is from Spabettie and it's for a Chipotle Tofu Potato Burrito w/chipotle vegan mayo. When I first saw the picture for this recipe I was drooling...maybe not literally, but I was close to it.lol If you check out the pics below I'm sure you'll agree. I had to use a few substitutions for this burrito but I think it was still one of the tastiest meals I've had.

This burrito was so flavorful and I can't wait to make it again. I've never made chipotle mayo before, so that was quite a tasty change. I used soy free vegenaise. I'm still on the hunt for the perfect gluten free wrap. I love the brown rice tortilla ones but they break apart when I try to wrap something in them. I use them mainly for quesadillas. Here's the link to the recipe: http://spabettie.com/2012/03/19/chipotle-tofu-potato-burrito-with-chipotle-mayo/
Posted by Stephanie at 11:57 AM 4 comments:

Promote Your Page Too

Stephanie
I'm an actress with a passion for God, film, and yummy food. I'm taking a journey through the world of Veganism and exploring its many wonders. All of the recipes I post on here will be fully vegan...but I can't say they'll always be healthy.lol