What did you have for dinner last night? Well, I had some very tasty stuffed mushrooms. Earlier in the week I made another crock-pot full of Chili to last me and the hubby a few days. But, Thursday night I wanted to mix things up, so after my workout  decided to whip up some stuffed mushrooms. I had evening plans and  knew I wouldn't have time to come up with an extravagant stuffing to fill them with, so I ended up just using some leftover quinoa and frozen chickpea patties. 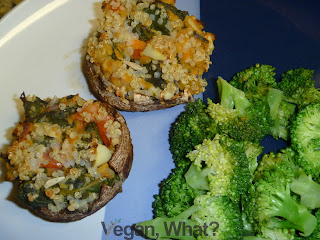 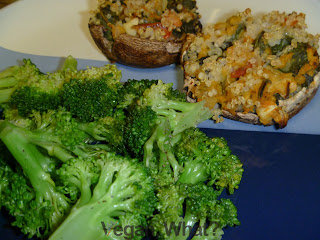 After thawing the chickpea patties, I chopped up some garlic, shallots, and tomatoes. I threw them into a pan and let them saute with some spinach. When the spinach was halfway done I crumbled the chickpea patties and added them in. While the stuffing was heating up I put a little water in another pan and sauteed the mushrooms for a few minutes. Once everything was ready for the oven, I put some parchment paper on a baking pan and loaded up the mushrooms with some leftover quinoa and the chickpea patty stuffing. I placed the mushrooms into a 450 degree preheated oven and let them cook for about 15-20 minutes. I paired them with some steamed broccoli. :-)
Posted by Stephanie at 10:54 AM 2 comments:

Promote Your Page Too

Stephanie
I'm an actress with a passion for God, film, and yummy food. I'm taking a journey through the world of Veganism and exploring its many wonders. All of the recipes I post on here will be fully vegan...but I can't say they'll always be healthy.lol